On June 24, KRCD was honored with the American Society of Civil Engineer’s Region 9 Outstanding Sustainable Engineering Project award along with Provost & Pritchard for the design and construction of the McMullin On-Farm Flood Capture and Recharge project. 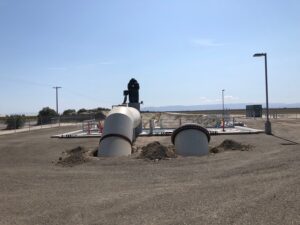 KRCD and Provost & Pritchard, in cooperation with Terranova Ranch Inc., and Bach and Associates, have planned and developed a system that will further groundwater sustainability in the region.

Terranova Ranch, Inc. has captured and utilized flood flows in the Fresno Slough when they are present, thereby reducing downstream flood impacts. The water has been spread on crop lands such as vineyards, alfalfa, and pistachios for in lieu groundwater recharge, wherein surface water is substituted for groundwater to reduce pumping. More recently, Terranova Ranch has captured flood flows for direct recharge (Bach and et al 2012; 2014).

With the implementation of Sustainable Groundwater Management Act in 2014, projects like the one at Terranova Ranch will mean the difference between farming and fallowing lands. 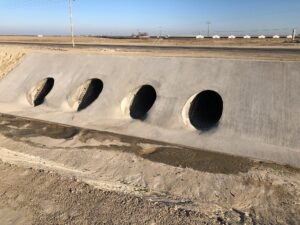 A goal of the McMullin On-Farm Flood Capture and Recharge project is to convey water in both directions east and north, while having the ability to divert flood flows from the west. The design of this project includes the main conveyance system which provides the hydraulic backbone for diverting flood flows and conveyance to the participating farm fields.